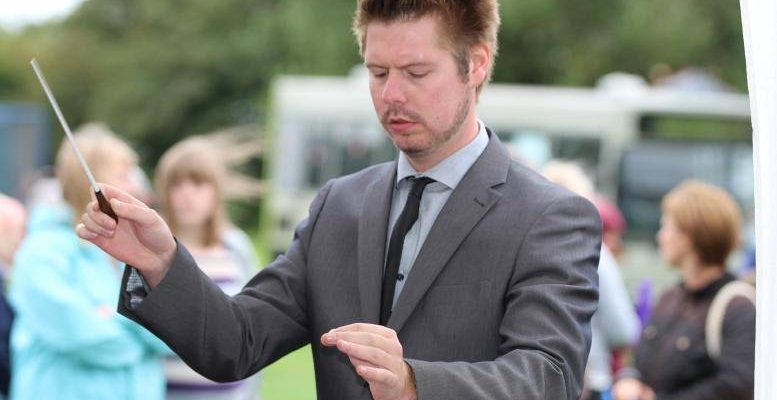 Adam began his banding career with Horbury Victoria Band at the age of 7. As a Baritone player he experienced success in a number of youth and senior competitions. Adam made 5 appearances at lower section national finals during a successful 7 year period between 2000 and 2006 claiming podium finishes on two occasions with Horbury and later Gawthorpe Brass. He learned a great deal from Ian Shires and John Hudson of Grimethorpe Colliery Band who both conducted bands he performed with during this time.

Adam completed a Music degree at Durham University between 2004-2007 and and was tutored in conducting by Ray Farr. During this time he was invited to perform at the Sage, Gateshead with the ‘Northern All Stars’ Band, a group comprised of the top 50 perceived brass players from across the North of England.

On completion of his degree Adam moved back to Yorkshire where he was invited to join the Skelmanthorpe Band. Highlights of his 7 years with the band included titles at Pontins, the Butlins Mineworkers contest, the Yorkshire Area and finishing as runners up at the 1st section National Finals all in the same year. Over the next few years the band qualified for the Grand Shield contest and established themselves as a solid Championship section outfit, finishing in the top 8 at the Yorkshire Area contest for 6 consecutive years.

Adam also took up the post of ‘Junior Band conductor’ at Gawthorpe Brass ’85. During a 9 year tenure Adam was responsible for the beginners, training band and youth band and took the band to the National Youth Championships on 3 occasions, achieving a Silver certificate in the Intermediate section in 2011 against much larger, more established organisations. Many of the youth players that Adam taught progressed to the senior band and have contributed to their recent successes.

In 2015 Adam was appointed as Musical Director at Huddersfield and Ripponden Band. The band finished in 4th place in 2016 at the first Area contest Adam led them to and in 2017 Huddersfield and Ripponden won the Area title and qualified for the National Finals, achieving promotion to the 3rd section at the same time. As well as achieving success at Test piece contests the band has also been active in competing in entertainment and march competitions with highlights including a 3rd place at the 2018 Brass Factor competition, winning the Best 4th section band prize at the Easingwold contest in 2017 and winning both the best 4th section and best 3rd section band prize at the Pogson Bray contest in 2016 and 2018 and 2019 respectively.

Since taking up the baton Adam has enjoyed performing with a variety of bands across the district including Hammonds Saltaire, Hepworth, Unite the Union and Elland Silver. He is also a member of the ‘Terrier Brass’ project set-up in 2017 to perform at Huddersfield Town games and is regularly invited to play with the England Band.

Adam has worked as a Music Teacher since 2009 and has held Head of Department roles in two schools whilst also working for the Leeds Learning Partnership as a Teaching and Learning Specialist. He is currently the Head of Arts at Springwell Academy Leeds, a provision based on three sites across the city that supports students that experience social, emotional and mental health difficulties.

We use cookies to ensure that we give you the best experience on our website. We also share information about your use of our site with our analytics partner who may combine it with other information that you’ve provided to them or that they’ve collected from your use of their services.Allow all cookies